No Land is the new musical piece of non-categorizable composer and guitar player Olivier Mellano.

At the crossroads of modern musical genres and new music, defying codes of traditional folk music, Olivier Mellano invited for this new projet the 30 musicians of Bagad Cesson and the marvelous voice of Brendan Perry from the Dead Can Dance duo.


I have always felt mysteriously attracted to the sound of Breton Pipe bands. At the same time, traditional Breton music seemed to always have the opposite impact on me. Today, I am confronting my writing to that ensemble in an attempt to solve this paradox.

Bagad contains a kind of martial ardour, an almost ecstatic self-discipline that moves me with its both rough and straight aspect, at first not appearing much pleasing and then that might completely take you. I wanted to see how we could make that ensemble sound different, with other harmonies, another form, another culture, still without rubbing out its characteristics and considering it sometimes as a compact whole of sounds, sometimes as an ensemble teeming with soloists. With No Land, the concern and the diversion of traditional codes outflank Celtic tradition and could just as well refer to the jajouka from North Africa or Balinese music; some signs of the sound-epilepsy of Terry Riley could also be brought back, Robert Frip’s weavings or stigmata from my own pop-rock-cold-noise culture that perfectly suits the bagad energy. As with my pieces for electric guitars or my ‘How we tried…’ symphony, there is something close to maximalism and to a will to wear out an instrumentarium so that an uncluttered shape might emerge. It is about finding a submergence state where reasoning is ineffective and it is about that other place where you can sometimes be propelled thanks to the sound.

No Land is an open saga, an independent shape made of a whole single movement crossed by diverse energies, it is a sequence of stormy and serene landscapes above which a deep and powerful voice is floating, Brendan Perry’s one from the Dead Can Dance duo. His voice, one of the most beautiful in the world as far as I am concerned, has been guiding me for a long time and I assume it indirectly contributed to the composition since I have the impression that I wrote the vocal line to measure, so much his tone is familiar to me.

No Land’s theme is the absence of frontiers, or more precisely the assertion of its porosity worn as a flag, believing that no human beings can be reduced to one territory even though this territory might have built them up. To make use of an ensemble that is traditionally linked to land claim appeared to me quite appropriate to demand that anyone be a membership of a greater world where we are all breathing the same air. Moreover, Pipe band initially being a military ensemble, I decided to have it bear a reverse message to the one it historically had been created for. The Bagad Cesson ensemble, with its curiosity as well as its taste for off-road performance and its high requirement of quality, was the perfect interpreter.

No Land is a political fiction programme, a humanist and utopian song, an ode against anything that confines and reduces Man’s complexity.

Who could deny that yesterday and today evils are not issued from the very moment someone attributed themselves a piece of the world, while cutting away its immensity, declaring themselves free but locking themselves up and starting by growing the stem of a system vowed to implosion. This canto proudly bears its own innocence and it might be from this repeated and accepted candour that we will find back the path of reason, of appeasement, even of a possible magnanimity. Olivier Mellano 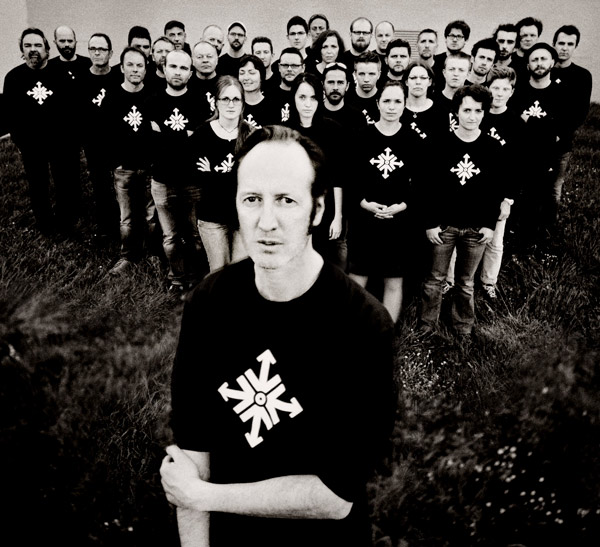 This press kit contains Richard Dumas’ photographies, the No Land logo and presentation.

► 19 languages to spread the words of No Land! 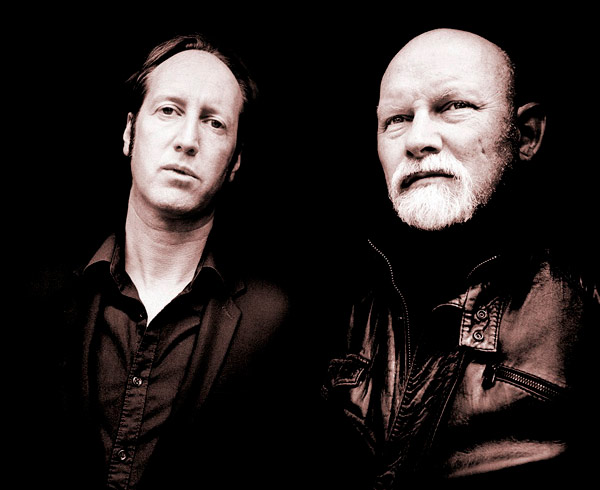 A record beyond categories, a kind of glorifying and secular oratorio, a rare experience.

Frontiers are beyond, horizon is expanding. Witness to the perfect alchemy between cultures, No Land is a musical journey crossed by melancholia and light.

At the border between celtic sounds and contemporary music, a music like a wild landscape.

If you’re still hoping for music to save lives, starting with yours, No Land may be the right destination.

Waves of energy, turmoil, quiet after the tempest and profound song of the world. An off-road melting.

Much more than a great record, No Land is one of these philosophies that the world needs more than ever, a priceless treasure for humankind.

A sensory experience. The strength of the theme and of those who embody it is enough to give the whole a remarkable depth. A message to the medidative dimension that may be tempting and reassuring to ignore but, once tackled, that can only change our vision of what is surrounding us.

A cross-breed creation combining the spirit of contemporary music and the quest for ancient foundations. Spectacular live.

Martial drums, tightened vocals and mental victory: the union of 3 bodies that everything separates, yet that everything reassembles, when locating oneself against an ever open world, and an ever closed world.

Bridges between centuries, a unique and puzzling piece whose timelessness will be revealed one day.

No Land is wonderful.

An ode which raises hearts and that has not finished to echo here and beyond human frontiers.