August 28, 5.56am, Strasbourg railway station. Just for one day, I’m slipping away from the TNS where I work at composing pieces for percussion instruments, for Ce qu’il faut dire by Léonora Miano, the next play by Stanislas Nordey. The train is speeding towards Belgium and the Rencontres Inattendues where I do expect to meet again the merry beard of the Pacôme Thiellement-mate for an ad-libbed concert-conference. 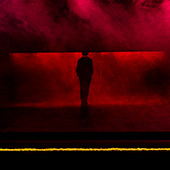 The new year is already on tracks and it is such a pleasure to resume, at long last, the Rothko Untitled#2 performance created with Claire ingrid Cottanceau just before the breath-holding of the first lockdown. From 18 to 20, we’ll make the stage vibrate till it becomes a scene for the Festival Musica at the Théâtre National de Strasbourg, with the Voix Imaginaires and dancer Akiko Hasegawa. No doubt that the voice of the great Jean-Luc Nancy will intensely resonate during these special evenings.

In the Norman city of Arromanches, there is a house near the sea where writers go to gather their golden fruits with the tide’s flow. I’m lucky to have been invited several times at Villa Brugère for writing and, this time, I’ll come back to make the gathering been heard. The Festival Route Panoramique offers me 3 events:

September 25, 2.15pm, we’ll go through the worlds of sounds of the La Funghimiracolette along with Katia Bouchoueva, Jean-Michel Espitallier and Fabienne Yvert who will also read some of their writings.

After a deep lungful of fresh iodic air, at 8pm just after the sky being set ablaze by the sun which has sunk behind Port Mulberry, Kate Moran will be my allied to climb back up Fleuve Kate by Hélène Frappat.

Will you be too far away from Normandy but still wishing to float with us, our June performance at the Maison de la Poésie is now on line.

And then, on the 26th to close the festival, words will hang on for an ad-libbed concert with Ronan Courty on double bass and writer Jean-Michel Espitallier on drums.

9.04am, the train is slowing down at Lille station, the new season is now well on its way. See you soon for the coming trips.