After the august slowdown, the new season starts, more surely than slowly, with a tense and ecstatic stroll for the Southern mini-tour of Coddiwomple, the trio with G.W Sok and Nicolas Lafourest that we formed at springtime. A sonic walk about Robert Walser’s one that will lead us on the 7th to L’Enclos in Montaigu-de-Quercy (82), on the 8th to Galetas in Salvagnac (81), on the 9th to the Amanita Muscaria in Toulouse (31), on the 13th to the Ferronnerie in Jurançon (64) and on the 14th in Mont-de-Marsan (40).

Although filming and recording No Land means doing our best to have some 40 Vikings fit in a Twingo car, the final concert at the Vieilles Charrues with Brendan Perry and Bagad Cesson was captured by Samuel Petit. If you were not able to see No Land on stage, this very fresh salty swig and swirly peat is available in streaming on Culturebox. 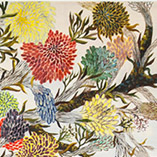 If you fancy, here comes a prescription for some swigs to smooth and galvanize the return :
A shivering swig, to let yourself float on ‘Les Berceaux‘ by Fauré magnified by John Greaves as an appetizer of the BAUM album out here below in November and of which two other tracks will be the foretaste of what is to come the 14th and 28th on streaming media players, with extracts from the Avignon concerts.

A striking down swig of joy with ‘Overwhelming joy’, the first track from the upcoming MellaNoisEscape to be download as from the 20th with a music video by Florent Trochel. The album will be out on 5 October.

A swig of Brière honey with ‘Alain Rey – De la terre aux étoiles‘ a beautiful movie from the forenamed Vikings’ compactor Samuel Petit, whose film score I composed and available on YouTube up to the end of this month.

And for the passengers tempted by a bath into the angels’share, a swig of light and ether at the Fondation Martell in Cognac where the installation ‘L’ombre de la vapeur‘ by Adrien M and Claire B keeps on radiating up to April 2019.

In production, the adjusting for the final notes of the ‘Face à la mère’ music, the Jean-René Lemoine play staged by Alexandra Tobelaim, the composition of the Tahitian film score ‘L’oiseau de Paradis’ by Paul Manate and the rehearsals for the the autumn tour of MellaNoisEscape.

As for the Walk by Walser, may this new season lead us, serene but disquieted, along unknown and always new paths, to destinations incessantly drift away.