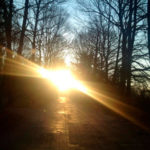 Last year, we were trumpeting with enthusiasm the round figure of the new year without knowing what that double astounded 0 hold us in store. A year when we had been preparing many things that are still waiting for blooming.

This month, come what may, we carry on working up on future dreams: a Proust project with Véronique Aubouy, a baroque-coloured program with Lembe Lokk, the renewed rehearsals of ‘Face à la Mère’ by Alexandra Tobelaim, spotting for a railway composition at the Luxembourg frontier, studio recording with David Sztanke in Dax and with John Greaves at Radio France for their upcoming LPs, composing vocal pieces for the Mélisme(s) Ensemble, the next score for François Reinhardt’s documentary film, the coming Mellano/Soyoc album and many other festivities bubbling in pipes.

The scarse dates that were wriggling on the first line of the starting block, the ‘Hour of the Wolf’ live-cinema, the ‘Face à la mère’ and ‘Ersatz’ performances will wait patiently again, just like each and every other concert and performance in forced hibernation. One comfort however: the ‘Acqua Alta’ by Adrien M & Claire B on Arte Concert from 18 January.

I wish you a very nice year, be that of light at the end of the tunnel and of restored life.