Such a pleasure to put pen to paper again and make the most to lighten these last gloomy days while, little by little, there is rejoicing to come. Following the last six months without any live music, things remain unsettled and we still don’t know when we’ll be back to standing venues. Then we’re dealing with what we have and, most of all, with what we have not as cancellations continue to obscure the new agenda.
However, some islets are floating.

The first date will come with gentleness on the 10th, at the Ardenne Abbey in greater Caen for a literary, cinema and musical evening with Thomas Clerc and Anne Serre, on a proposition by the writer Hélène Frappat for her “L’amour est une fiction” exhibition at the IMEC. 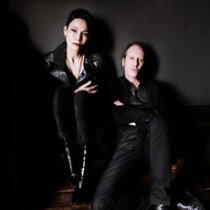 Quite eager to fight it out, we start to clear away this new cultural year by recording our duo album with Mona Soyoc.
On the 12th, we’ll leave the recording studio for a concert with the Festival Farniente of Saint-Nazaire at the beach of Monsieur Hulot who would certainly identify with the gangling figure of the wonderful Jean‑François Pauvros, whose set is also programmed there. No need to tell you that this come back on stage and with dB power will have a special taste.

Would you like to dive into the Maori mysteries in a bewitched Tahiti, L’Oiseau de Paradis, filmed by Paul Manate and released this summer in theatres and on VOD, will be screened on the 15th at the TNB in Rennes for a special evening. We’ll be there with the film director to meet you after the show. The score I was happy to compose is out on Plaza Mayor and on download platforms.

In Paris, Vibrato filmed by Sébastien Laudenbach is given a new format and a new major-scale frame at the Grande Halle de la Villette for the Jam Capsule, an immersive sound-and-visual experience to live until the 12th. Book tickets on line.

Some other weightless spaces, created by the magicians Adrien M & Claire B, the Faire Corps exhibition is reopened at La Gaîté Lyrique in Paris until January 3, 2021. In Rennes, the Mirages & Miracles resonate at the Champs Libres until October 18.

It’s all for this halftone upturn and we continue to prepare the next sets hoping that the dates be less and less occasional and that we might soon see each other smiling.