A new month, and nine manners for organizing matter, nine experiences among an infinity of others for vibrating, echoing, being penetrated, going on transforming and always be new… 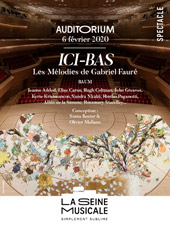 … just like Fauré Melodies that seemed, at every play, springing up as if it were the first time. For it might be one of the last chance to feel the timeless Ici-bas live experience with BAUM, we’re pulling out all the stops engaging ten divine voices and inviting for these special occasions: Jeanne Added, Camille, Élise Caron, Hugh Coltman, John Greaves, Kyrie Kristmanson, Sandra Nkaké, Himiko Paganotti, Albin de la Simone and Rosemary Standley who will stagetwilight, stagenight-time or stagedelight the Seine Musicale in Boulogne on the 6th. 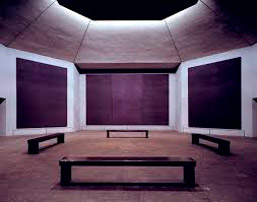 And a brand new creation with Claire ingrid Cottanceau to follow our journey inside the Rothko magnetic mystery. Drawing out the ACR France Culture, this performance -titled ROTHKO Untitled#2- intended as an audio-visual experience, will be produced at the Théâtre National de Bretagne in Rennes from 11 to 14, with the vocal ensemble Les Voix Imaginaires and the choreographer Alban Richard, along with us on stage.
We will then be in Valence on the 18th, along with the choreographer Myriam Gourfink as the Lux special guest.

A book is being published at the same time: it includes our conversations with Georges Didi Huberman, Susza Hantaï, Fabrice Midal, Jean-Luc Nancy and Arthur Nauzyciel as well as the Rothko Chapel Poem by John Taggart -the precious poetical matter which instils the performance. The book is published by the Atelier du Bourg and it will be available after the show or online. 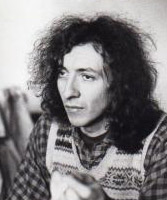 Another mood to experience at Gare Jazz in Paris where John Greaves opens his second month of Sunday carte blanche. I’ll be there, alongside him again, on the 16th with David Aknin, Sylvain Daniel, Himiko Paganotti, Arnaud Roulin, Laurent Valéro and Thomas de Pourquery. For the ***23**** (drum roll) Highlight! We will celebrate and blow out the 70 candles of the great John with a flock of surprise guests.

The day after, on the 24th, once the jazzmaster is dusted off its confetti, I’ll meet Mona Soyoc at Petit Bain for the first concert in Paris of our duo, in order to preciously keep outstretched the braided string of our experiments and before the recording of our album at springtime. And as happiness never comes alone, even in gothic world, we’ll share the stage with The Legendary Pink Dots.

Maori occult powers and shady political powers for the Paradise, plot, the feature film by Paul Manaté whose score I composed: a fascinating Lynchian experience in Tahiti land that will be on screens in avant-première for the Festival Travelling in Rennes, on the 16th at 8.30pm at the TNB.

Concerning Adrien M & Claire B’s adventures, the Faire Corps experience is launched at Gaîté Lyrique in Paris and you have up to 3 May to melt into this hammam vibrating with sounds and lights.
The Acqua Alta show feeds its flood that will run-off to Agen, on the 4th and 5th, it will burst in Mulhouse on the 11th and 12th and will bathe Freiburg in Germany on the 14th and 15th. The exhibition will then irrigate Clichy-sous-Bois from 18 to 29.
One spurt across the Atlantic Ocean and Mirages & Miracles land in Montréal from 18 February to 5 April.

To end with, 3 powerful theatre experiences, 3 actors alone on boards.
A son, Stanislas Nordey in Qui a tué mon père ? from 24 to 27 in Lausanne.
A mother, Emmanuelle Hiron in Le Fils on the 12th in Blois.
My brother, Julien Mellano in Ersatz on the 1st in Edimbourg and the 29th in Clamart.

Still, what a strange thing it is to shape vibrations of air or particles of light to create emotions. As long as this absolute oddness remains on our planet, maybe all is not lost. At least, the experience is not vain.