Posted at 23:10h in News by C
The great slow-down of summertime is softly starting to expand time, expansion favoring the founding of future projects which, as it seems, might be a few, big ones and little ones, all captivating.

But before going back down the mine, some MellaNoisEscape concerts on the open air: on June 20, at Castelfranc and on the 21st at Figeac to make the hieroglyphics of the Champollion museum dance. After that, just like bubbles of storm at the heart of the hard-working summer: on the 25th of July at Malestroit for the Pont du Rock to wake up ghosts 25 years after opening the first edition. The bridge will lead to Switzerland and up to August 21, when we will make the calm mirror of Lake Geneva shiver, with the nice barbarians of ‘For Noise’ festival.

Another lake, the one from Murnau’s Sunrise: A Song of Two Humans, will also be called upon to be once more shaken, on July 22, on the pleasant island of Batz. I will be pleased to write again music for several short fiction stories for radio, scheduled for release in September on France Culture, after ‘Oswald de Nuit’ that was broadcasted last month.

For the first time and under double pressure from the two angels of Les Balades Sonores, I’ve made up my mind to let my monsters come out of the notebooks where they have been prisoners for years. The ‘Rational Gallery of Inner Monsters’ will therefore appear in broad daylight in Paris 1 avenue Trudaine, on July 8; moreover, to sweeten the pill, the entry onto the world scene of these untamed 2-dimension ectoplasms will be celebrated by a MellaNoisEscape showcase.

Here it is for my bee-business. Meet you in September for the new autumn term.

From now on, enjoy reading under the trees and, if not already done, choose ‘Le Soleil’ by Jean-Hubert Gailliot as it is probably the best time for it; if you feel like listening to punk-rock while thinking there is no more, Metz’s second album is surely for you; and will you need to be the hypest and most gorgeous one this summer, look around here to see what you may proudly wear: http://boutique-ulysse.com/olivier-mellano 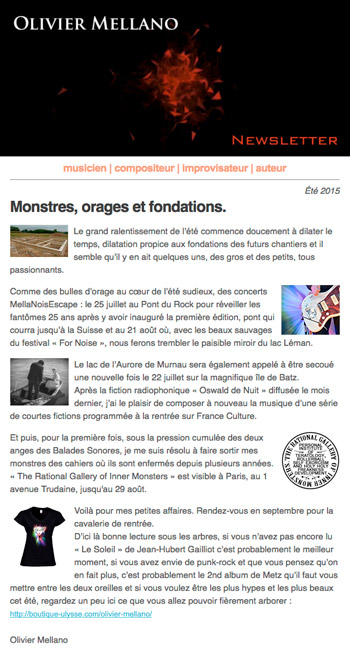