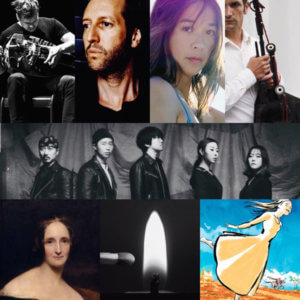 It was said that silence would be required for summertime, however some new stuff gives me the pleasure of an addendum to the previous summer cocktail-whose juice you still can taste with the superfolean gang of Jambinai on July 5 for the Eurockéennes de Belfort and the Hour of the Wolf-Funghimiracolette-MellaNoisEscape triplet on July 19 to 20 for the Festival Arts In Situ near Rennes. A cocktail with an extra, an escape for the Festival d’Avignon with France Culture radio to score ‘Mary Shelley’, unpublished text by Hélène Frappat, to be heard live on the 12th inside Musée Calvet’s yard, then on radio on the 16th at 8pm.

I also take this opportunity to freshen up your memory –if nothing less- with unmissable dates already announced last month: Ersatz in Avignon from July 5 to 24 and Face à la mère on July 11, Mirages & Miracles in Auxerre up to September 1, and in Linz up to March 1, or L’Ombre de la Vapeur still exhibited in Cognac.

As I did not mean to bother you for so little and anticipating that summer would be hot, we offer you the iced fire of THE GLINT , the latest MellaNoisEscape music video filmed by Samuel Petit.

One last thing, would you not have seen this marvel, The Girl without Hands welcomes you with open arms on Arte TV up to September 9.

And now, I leave you until September wishing you a peaceful and bright summer.