Here comes the last sprint of this season, a cocktail of flavours from this fizzy year, mixing and shaking: an improbable Superfolia, a labyrinth, warrior girls, a shipwreck, Hour of the Wolf and MellaNoisEscape to put the boot in. But let’s start with the BAUM balm.

On the 4th of June, we will fill the native land of Gabriel Fauré with underwood fragrance, with elderberry and lilac from his Melodies, together with the inner circle of Elise Caron, Hugh Coltman, John Greaves, Kyrie Kristmanson, Sandra Nkaké and Himiko Paganotti. Intertwining of shadow and light unfolding at L’Estive – Scène nationale de Foix.

On the 12th, I’ll meet Pacôme Thiellement again In the labyrinth of an ad-libbed conference that might lead us from the heights of Mount Analogue to the gnostic codices of Nag Hammadi and through the Black Lodge, unless miles away. An experiment where it will be question of getting lost so that to find ourselves at the Maison de la Poésie in Paris.

On the 22nd, in Paris again, I’ll join in Guerrières at the Générateur. A 4-hour ad-lib shared with Ève Risser and Melissa Laveaux right inside an interactive installation made of words from women and orchestrated by Lucie Antunes and Uriel Barthélémi.

June 28 and 29, heavy weather warning in Rochefort: I’ll improvise the stormy music of the third part of Laurent Leclerc epic trilogy about the shipwreck of the Raft of the Medusa, reassembled at full-scale in the Musée de la Marine yard, with Catherine Salviat and Birane Ba from the Comédie Française and supported with some thirty extras. 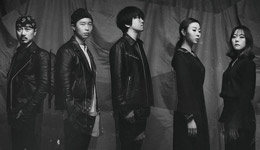 Then, likely one of this year climax: on the 5th of July, the Festival des Eurockéennes de Belfort offers me to handle its yearly creation all about the splendid and fiery post-rock-core Korean band JAMBINAI. As if it were possible to widen further the fascinating sound overviews of this musical U.F.O. soaking its traditional instruments into a sonic lavabath, I’ll invite at my side a blasting Superfolia Armaada made up of the telluric hurdy-gurdy player Yann Gourdon, the extraterrestrial bagpipes of Erwan Keravec and the iconic Kazu Makino from Blonde Redhead. Hugeness of sound on the horizon. 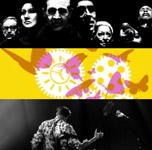 To end with, a final salvo of open-air near Rennes, on the outstanding Fours à Chaux site in Lormandière for the Arts in Situ festival with 3 dates.
July 19, under the stars, the new film scoring I’ve composed mesmerized by the fascinating nightmarish visions of the Hour of the Wolf by Ingmar Bergman.
July 20, the electrical joy of a MellaNoisEscape concert with the smashing Suzy LeVoid on bass guitars and Lucie Antunes on drums, and the irreplaceable Nicolas Dick at sound control.
July 21 on the afternoon, lying on the grass, you are invited to be rocked by the dreamy music of my little yellow book, La Funghimiracolette, to the sound of Claire ingrid Cottanceau’s voice. By the way, that unrivaled hammock partner may still be ordered at your bookshops or at MF Editions and, would you rather have a nap with headphones on, the podcast of Atelier de Création France Culture is available.

Elsewhere, in South Africa, you will hear the music I composed for Ersatz by Julien Mellano in Grahamstown at National Arts Festival from 28 to 30 of June, or in Avignon in Train Bleu from 5 to 24 of July, as well as my music for Face à la mère by Alexandra Tobelaim on July 11 at La Manufacture.
For Mirages & Miracles by Adrien M & Claire B if you were in Auxerre, at the Abbaye St Germain from June 22 to September 1 if you visit Austria, at the Ars Electronica Art in Linz from June 25 to March 1, 2020. And still for L’Ombre de la Vapeur up to October if you go by Cognac.

After that, summertime will let us ask ourselves, time and again, the question of meaning, of doing nothing, of taking our time, of reading, of listening to silence, of clarifying further the new vision of the world granted by quantum physics, of exploring its consequences, of writing, of writing the next part, of sharpening our blades for the following season, because the struggle, cheerful, is also here, at the very core of all that, by a thousand shapes trying to organize beauty, mind, trying to slow down entropy and trying at each moment to unveil some tiny snatches of the invisible magnificent scale we are striding along.

Have a nice summertime everybody.