Home > News  > Following me on March

01 Mar Following me on March

An all red calendar hitting the ground running for a month full to bursting. Would you fancy following me on March, fire!

It all begins at La Commanderie des Templiers in Saint-Quentin-en-Yvelines where we will celebrate the closing of our Tan exhibition with photographer Richard Dumas, during a performance looking like a big sound and visual fire shaped as an ode to what is disappearing.

Then I will go down to the Fauré mine to extract other wonders from it and to prepare the second part of climbing this holy mountain with the invaluable roped party: Simon Dalmais, Anne Gouverneur and Maëva Le Berre. I keep warm for you some breathtaking news about this project of the coming months.

I will then dash to meet Claire ingrid Cottanceau and a new choir so to have resonated the secret of the slowness and the suspended time of NOVA – Oratorio, at the Théâtre National in Strasbourg, on the 12th and 13th. 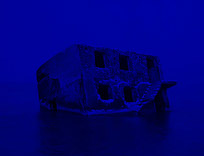 No gap, cape to Gap to pass the brand new music score Face à la mère to the chic crack trio: Lionel Laquerrière (guitar), Johann Buffeteau (drums) and Vincent Ferrand (double bass). These precious boys will perform live the music that I had the pleasure of composing for that Jean-René Lemoine play directed by Alexandra Tobelaim.

Next stop, Lyon to incubate the future and monumental installation of Adrien M and Claire B where it will come to cognac (40º), Cognac (16) and mushrooms feeding on the angels share.

And then -Joy!- I will start recording the second MellaNoiseScape album at Studio Caverne, and it is the exceptional drummer Valentina Magaletti who will set fire by putting down the few tens of thousands of magic drumsticks required for the contemplated trance.

The month will end in the ‘Chaos’ of the explosive latest novel by Mathieu Brosseau with whom I will perform an ad-lib musical lecture at the Maison de la Poésie in Paris on the 30th. This man of taste has also lately used the NO&RD music for an unidentified video and literary object entitled Vies particules.

Among all this, other notes will snake inside the Mirages et Miracles of Adrien M and Claire B at L’Athanor – Scène nationale d’Albi (81) from March 10 to April 8, at the heart of the priceless Carpathians of the Bob Théâtre that will play again the unsinkable Nosferatu -fifteen years already!- during its carte blanche at the Théâtre Firmin Gémier / La Piscine in Châtenay Malabry (92) on March 25, or behind the cardboard V.R. glasses of the unmissable Ersatz that will be at the Scène Nationale du Sud-Aquitain in Anglet (64) from March 14 to 17 and before proceeding to Paris at the Théâtre Mouffetard from March 28.

Here it is for my bee-business. Still, whether the next month is calmer remains to be seen but as long as we do not move faster than music everything may remain possible.