At a time when reality is not quite fully aware of the bloom of its virtual twin and of its augmented implant, a few artists put their feet in the door of the future knocking on it and they seize a domain that it would be inconceivable to leave at those who chose money rather than life. Adrien M and Claire B are ones of these heralds 2.0. Song of stones, mystical dance, moving matter and digital disembodiment form ‘Mirages & miracles‘, a series of installations that I was pleased to compose sound for, and that you can visit at the Subsistances in Lyon from 5 to 22.

Another story of the eye, the corneacopia of the ‘Perceptions & illusions‘ exhibition is still dazzling at the Commanderie des Templiers in Saint-Quentin-en-Yvelines, with, among others, the ‘How we tried’ and ‘TAN’ installations.

On the stove, the composition of music for the new theatre play ‘Face à la mère‘ from Alexandra Tobelaim; the recording of music for the documentary film by Samuel Petit about the beekeeper of prize-winning chefs; and some piano finishing touch for Isabelle Rèbre’s film ‘Pollock & Pollock’. 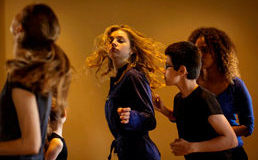 Just one stage this month, during the Paris Opera Festival 3e Scène teleported at the Gaîté Lyrique where I’ll meet choreographer Thierry Thieû Niang and the 20 kids dancing ‘Au cœur‘ on the 10th at 3.30pm. Apart from this ode to fall turned into flight, all the movies from 3e Scène will be shown, among which the vibrationing Vibrato from Sébastien Laudenbach…
…with who we’ll iron our dinner suit, for the Lille ceremony of the Emile Awards (European Animation Awards) where ‘The Girl Without Hands’ will cross her fingers as she is nominee for Best Character Animation and Best Soundtrack. Verdict on the 8th.

From animation to animism. ‘Stefano’s Story‘, the beautiful film from Chiara Malta whose music I composed, will be shown on the 13th at La Clef cinema in Paris 5è during the Primavera Cinéma.

To end with, the No Land album has been available for the past few days at every record shop -as well as here would you have no record shop at hand- and by reading the first press reviews and hearing the warm feedbacks, I am happy to see how much the project has been rightly understood.
It strengthens the intuition that sometimes music may also be a platform for philosophical experiments, that no idea is complex as long as we haven’t tried to simplify it and that politics could gain more by having the humility to be lit up by poetic.
Maybe just a question of (taking) time.

While waiting for the next joyful operations, I wish you all a loving end of the year, anima animated.